Will Smith is devastated After Ban By Oscar for 10 years

by Hanson
in Entertainment, News
0 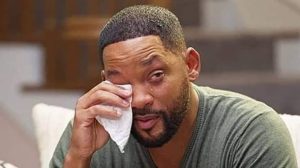 American Actor Will Smith is devastated After Being Ban By Oscar for 10 years.

TEN YEARS ban by the Oscars Ceremony was vetoed.

Following his brawl with Oscar host Chris Rock which Will Smith slapped the American comedian, he was the ban by Oscar for 10 year but aside his ban by Oscar as punishment for slapping Chris Rock the actor has lost the following.

•His biographical film was cancelled.

•The Fast & Loose movie he was shooting for Netflix has been cancelled.

•The movie I AM LEGEND 2 no longer wants it and they offered Michael B their role.

•He was expelled from the Academy of Sciences and Cinematic Arts (He didn’t resign, he was fired).

•His wife didn’t back him up, in an interview for AMERICAN WEEKLY he declared that she didn’t ask to be saved and called him “EXAGERATED”.

•His wife’s boyfriend is going to take out a book charging a fortune to sell his story.

•Chris Rock brothers are looking for him, they publicly said “We’re going to tear you apart.”

•No producer wants to work with him on any kind of project.

• Their dramatic series BELL AIR reboot of Bell Air Prince is being smashed by criticism.

“ Erica: 1 Suffered Depression When The Public Knew About My Relationship with Kiddwaya, My Next Relationship Will Be Private”- Erica Tells Nancy Isime