#BBNaija – “Angel Makes Me Forget Things; I Would Have Slept With Her If She Is Stil In The House” – Cross 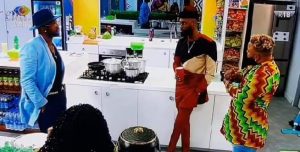 #BBNaija – “Angel Makes Me Forget Things; I Would Have Slept With Her If She Is Stil In The House” – Cross

BBNaija housemate, Cross has revealed the effect that Angel had on her when she was in the house. It could be recalled that Angel was given a fake eviction alongside Pere and the other housemates believe that they have been evicted.

Cross has stated that it is good that Angel was evicted from the house because he would have slept with her if the reverse was the case. Cross further stated that he always forget things when he is with Angel because of how attractive she is.

However, Whitemoney agreed with Cross and stated that it is the same issue with him because it was not easy for him to stay with Queen before she was evicted.

Many would argue that Angel may be disappointed to find out that Cross would be alright with her being evicted from the house despite the connection that they shared and how she understood him.

After a long battle game Angel and Pere makes it to the final Congratulations to PERE and ANGEL they have both made it to the #BBNaija Finale. 🥰