#BBNaija : I don’t want to promise you anything and disappoint you later. Kiddwaya tells Erica

Big brother Naija Lockdown Housemate Kiddwaya has told his lockdown housemate girlfriend Erica that he doesn’t want to promise her something and disappoint her later.

According to him he comes from a rich family and a lot of people has high expectations on him about the king of people he should marry.

Kiddwaya: I don't want to promise u anything & disappoint.

Erica: I understand. I only ask questions to understand better because everyone here says you're cold, though as a joke. I can say that too.

Kidd: They are joking but i need to dig deep and bring that side out #BBNaija

Erica and Kiddwaya talking about life outside the BBN house 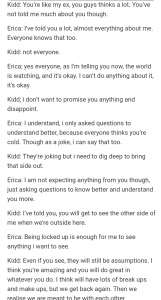 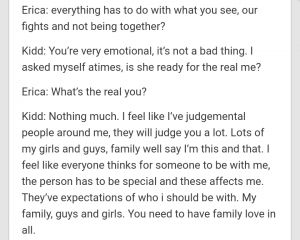 READ ALSO: #BBNaija : Laycon, Nengi and Vee won the Johnnie Walker Task and a million naira each, and an all expense paid trip to Scotland. #bbnaijalockdown2020

READ ALSO: #BBNaija : Who is Laycon, he should get out, I’m done with him – Erica

READ ALSO: #BBNaija : Why I was pissed at Laycon- Vee.

READ ALSO: #BBNaija : I will pay my tithe first from the money I have won and when I win the 85million – Brighto

READ ALSO: #BBNaija : Why I can’t be friends with Wathoni – Erica

#BBNaija : Laycon, Nengi and Vee won the Johnnie Walker Task and a million naira each, and an all expense paid trip to Scotland. #bbnaijalockdown2020

#BBNaija : Fight of the night between Erica and Laycon.

#BBNaija : Fight of the night between Erica and Laycon.