BBNaija Housemate Kaisha has just been evicted from the Big Brother house. With the current nomination rules Housemate were asked the nominate two fellow housemate.

After the viewers’ votes, four housemates, Wathoni, TrikkyTee, Neo, Kaisha had the lowest votes and they were stood up for possible eviction.

With the new twist that was initiated at the last eviction process where viewers were stripped of the eviction rights, housemates were made to nominate two housemates out of the four up for possible eviction, to be evicted from the house.

The housemate nomination process started with the deputy head of house, Kiddwwaya, who nominated Wathoni and Kaisha. Praise selected Trikytee and Kaisha.

With the majority of the housemates picking Kaisha and for eviction, the two housemates were announced as the next set of housemates to be evicted from the lockdown house. 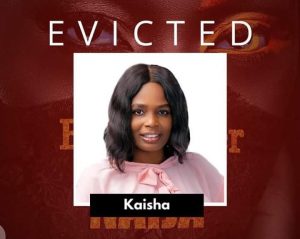 So far, two male and three female housemates have been evicted from the show. Fourteen housemates are now left in the game to clinch the coveted grand prize and be crowned the Big Brother Naija season five winner.

#BBNaija : “Erica might end up with Kiddwaya father outside the house”. Nigerian Filmmaker – Ayo Shonaiya