A man identified as Efful-Etteh has been seen fixing DStv for customer on his wedding day while his bride waits in church.

The groom was seen fixing different part of the DStv as onlookers stare at him while admiring his courage.

The video was posted on Twitter by a lady identified as Yaa Melanin who as well was amazed by the incident. 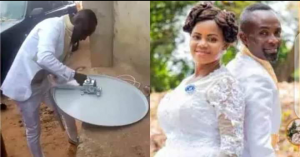 #BBNaija : Ka3na says Nengi was a confused follower and not a leader as the first head of house

#BBNaija : Ka3na says Nengi was a confused follower and not a leader as the first head of house