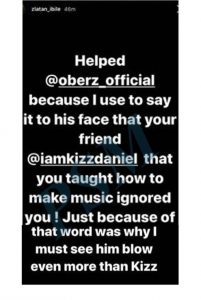 He posted on his Instagram story shading Burbaboy Kizz Daniel and Burbaboy.

He claim that Kizz Daniel turn his back on Oberz who is now Zanku music artist and claim he will make sure Oberz surpasses Kizz Daniel in the music industry claiming Oberz taught Kizz Daniel how to make music .

He further went on the shade Burbaboy for not congratulating him after his child birth after telling Burbaboy that his girl has a child.

He then shade Joeboy by acknowledging his talent but claim he doesn’t know music business. 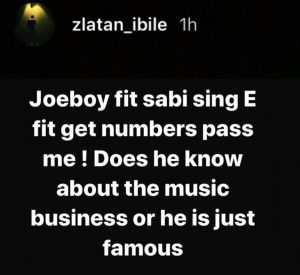 READ ALSO: Hushpuppi to be extradited back to Nigeria to face trial after Interpol Confirmed his arrest.

READ ALSO: Nollywood has made the world see us as Fetish- Reno Omokri