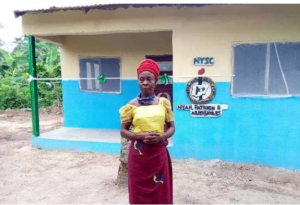 According to the Corp member  Patrick who said he was touched and moved when Mrs Blessing Onyekwere who lost her husband about four years ago being thrown out by their landlord at where there were living before with her four children.

NYSC who on their Facebook page said the Corp member initial intention was to donates books to the community school her served but change his mind when he saw the conditions of Mrs Blessing the widow. 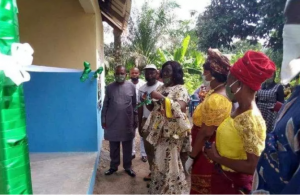 NYSC further added that Nyah Patrick decided to embark on the project when he met the woman and her four children after being ejected from their previous resident.

He Nyah Patrick added that his intentions was as he arrive at his Host Community he would print about 2,000 books and give to student at his PPA at Ibere comprehensive secondary School but he later change his mind after he saw the conditions of the widow. 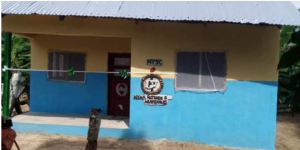 And he later went into the community to seek for support for the project.

Mrs Blessing Onyekwere the widow who spoke during the commissioning of the project broke down in tears and thank the Corp member for the kindness towards her and her children.

The Abia state Nysc  coordinator Lady Bona Fasakin commended the Corp member and hip praise on him saying he is a good ambassador and of NYSC for providing succor to the needy in his Host Community.

The Transition Committee chairman Ikwuano Local Government area Mr Stanley Ejigbo thanked the Corp member for the gesture adding that whatever a man soar he will surely reap.

Among others who witness the commissioning were members of different group the principal of school Patrick served, different unions, family members of the Corp member , and state Official of NYSC.

READ ALSO: Photo of a man and a woman bound together inside a pineapple found inside Atlantic shoreline