BBnaija Reunion show is becoming Toxic, Khafi lament about how Ella was treated

Former Big Brother Naija pepper Dem housemate Khafi is not happy about how Ella was treated last night on the show.

On the show last night Vanita was hard on Ella stating that she is ungrateful and ghosted on fellow housemate after they all contributed to her mother’s surgery.

Mercy Eke was not left out from those who graciously attacked Ella , among those who said that Ella was showing an ungrateful habit were Diane, Jackey, Kim.

Vanita also said she could have been lying about her mother sickness and that she is bipolar.

Mercy went ahead to ask her if takes drugs. 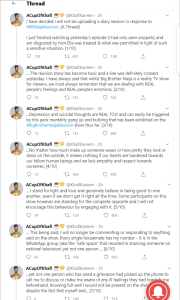 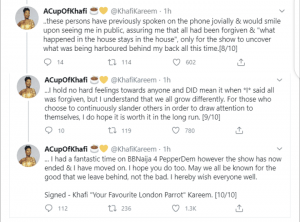 Khafi who is currently in UK didn’t take it funny so she went to her Twitter to rant about fellow housemate behavior towards Ella.

READ ALSO: NYSC Corp member build and donate house to a widow after she was evicted from house by her Landlord