A girl age 17 is laying in Igbobi Hospital in Lagos Paralyzed after sustaining a spinal cord injuries.

She was allegedly beaten, raped and left inside drainage to die by a 28 years old man identified as Robin GodDay in Agbarha industrial areas of Lagos State. 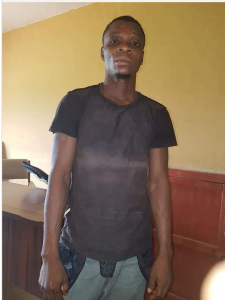 The incident which occurred on April 23rd , According to the victim aunt said Favour lost her mum in 2007 and has been raped by Robin before these year.

She added that Favour lives with Robin sister because they worked together, and it was at her friends house that Robin raped her. 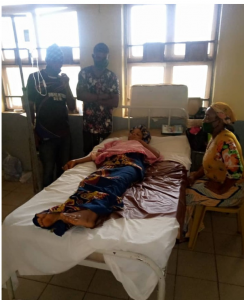 The incident was reported to the Police and Police made Robinson signed and undertaking never to rape Favor again.

But unknown to Favour Robin has planned another attack on her again and while Favour was returning from work on 23rd April, Robin attacked her and raped her again her Aunt said these on an interview with Linda Ikeji blog 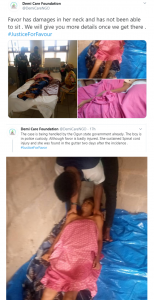 She said. “What happened is that on the 23rd of April, she went to work and while on her way back, she was attacked by the 28 year old boy who raped her and beat her up and then pushed her inside a gutter.

We were looking for her all through that day but we couldn’t find her. It was the following day that some people rushed down and told us that they saw a fair lady inside the gutter. We ran down there and brought her home. All parts of her body was destroyed.” 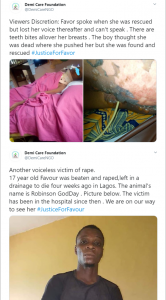 The matter has since been taken up by Demicare Foundation and the coordinator Bimbo said that Robinson has since been arrested and is in Elewaran Police division in Ogun State and that Ogun state government has taken up Favour Medical bills.

And effort to get in touch with Ogun state police command prove abortive as he didn’t pick up his calls.

READ ALSO: NYSC Corp member build and donate house to a widow after she was evicted from house by her Landlord

READ ALSO: Photo of a man and a woman bound together inside a pineapple found inside Atlantic shoreline