A guy shared a picture of a man and a woman inside pineapple tied together on Facebook.

According to Simon Utsu who shared the photo on his Facebook wall said he found the pineapple with picture Inside at Atlantic shoreline.

He questioned it by saying Voodoo?, Love charm?.

In his statement he said.

“Things we see on the Atlantic shoreline. Pictures of a guy and a lady placed in a pineapple & bound. Voodoo? Love charm? Some sweet juicy love is about to turn very bitter innit?” 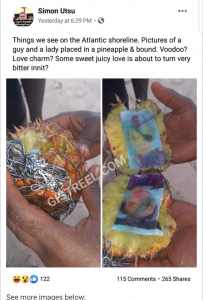 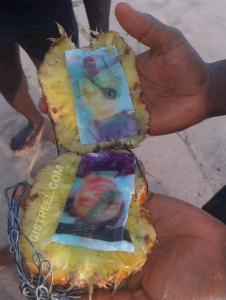 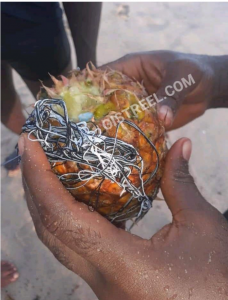 READ ALSO: Police arrest woman who stabbed her neighbor over a misunderstanding in Lagos

The photo of pineapple with photo of man and a woman found in Atlantic shore.