A lady identified as Maureen poured her husband Me Oyinkro hot water while he was sleeping for slapping her during an argument.

Mr Oyinkro who was left in shock and severe injuries after his wife Maureen poured hot water on him while he was sleeping.

The incident which took place at their home along INEC road Kpansia Yenegoa Bayelsa state.

According to report an incident occurred a day before because he came home early  and he slapped her for insulting him when he found caught her somewhere in town.

The couple agreed to meet at a certain place by 8pm but he closed from work early and got a lift on getting to the agreed place they were to meet by 7pm he sat down and suddenly he saw his wife worked pass him.

He got up and walked to her to alert her he is around. She was shocked and got angry why he came there very early.

“In shock, I then asked why she was angry that I came early. That was when she started accusing me of monitoring her. She insulted me till we got home.

I thought that we could settle the matter at home but it was hell. So out of anger, I gave her two warning slaps and instructed her to go to the bedroom and sleep.

At that point, a friend called me to come to his place for a private birthday party, and unfortunately, I came back home at about 1 am. So I was sleeping on the sofa in my living room when suddenly she bathed me with hot water.” 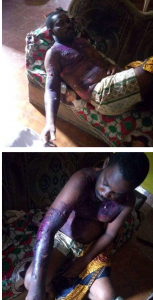 Mr Oyinkro wife Maureen has since ran away from home after bathing her husband with hot water, she has been calling the family to bed for forgiveness stating that it’s the devil that pushed her to it. 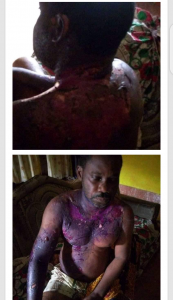 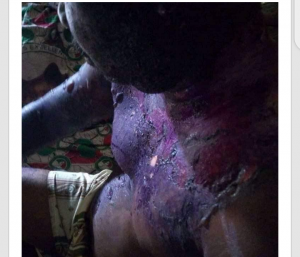 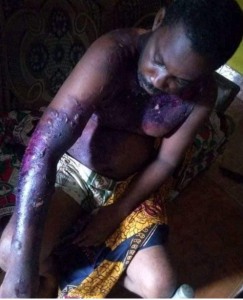 READ ALSO: Police arrest woman who stabbed her neighbor over a misunderstanding in Lagos

I am an Antichrist, I’m a Marine Goddess, I denounce Christianity long time ago- Nigerian Lady reveal