One Mrs Onuobodo has died of Stampede in Elele kingdom Ikwere local government area of Rivers State while struggling to receive pallative shared by the River State Government. 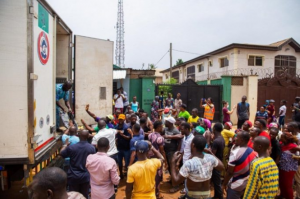 The deceased who rushed to the venue with expectations of luck to receive the pallative but she however met her untimely death as a result of impatient by some people trying to receive theirs as well.

While confirming the incident the councilor representing Elele ward 4 Me Emmanuel Amadi said the woman died at University of Port Harcourt Teaching hospital.